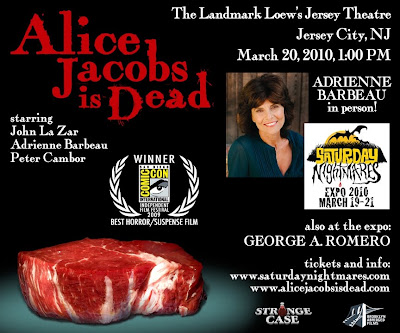 I got a fantastic bit of news via email earlier tonight.

A little while ago we got the chance to review the outstanding zombie short “Alice Jacobs is Dead” (full review here). Boasting top notch production values and starring John La Zar and Adrienne Barbeau, Alex Horwitz helmed a short film that rivals some of the best work coming from larger studios and production houses.

Well it looks like others are taking notice, as Alice Jacobs is Dead has been chosen to take part in the Romero Love-a-thon at the upcoming Saturday Nightmares horror festival.

Even cooler, Ms. Barbeau will be on stage to help Alex introduce his film.

The festival is a weekend jam packed with goodies for horror fans. George fraking Romero himself will be on hand for a Q&A as well as Ken Foree, Tom Savini and other cast and crew members form Dawn of the Dead. There will be special screenings of Night of the Living Dead, Twilight Zone marathons and a special double feature of Creepshow and Dawn of the Dead. Add in contests, giveaways, guest panels and a slew of vendors peddling their horror related wares and you’ve got yourself a kickass weekend.

This is great news for Alex and for independent horror in general. The film has gotten rave reviews, and the fact that an up and coming filmmaker is getting the chance to show his movie to a packed ravenous house as well as to some of the icons of the genre is terrific news for those that hope an audience exists for shorter horror flicks. Plus, I don’t think it gets any cooler than getting tips about zombie film making than from The Master himself.

The festival runs March 19th through the 21st at the Landmark Lowes Jersey Theater in Jersey City, NJ

For a complete list of guests, films, vendors or programs, or to buy tickets go to the Official Saturday Nightmares Web Site.

Movieweb.com says: “In a sea of zombie movies, this one stands out as a quiet, gory masterpeice of invention, a true successor to the legacy of George A. Romero”

Of course, for those of you that can’t make the trek to Jersey, we cordially invite you to our own screening of Alice Jacobs is Dead alongside the feature film Night of the Living Dead: Reanimated at the next All Things Horror Presents film night April 7th at the Somerville Theater.