twitterfacebookfeed
Go
A decade removed from the original Woodsboro murders, Sidney Prescott (Neve Campbell) returns to her home town to promote her memoir and self help book.  However sleeping ghostfaces can’t lie as her return sparks a new wave off movie inspired killings. Once more Sidney finds herself the center of violent attacks and those around her are ruthlessly butchered. Gather round folks, it’s time for Scream 4.
Fair warning, spoilers abound once you scroll past the poster though inn fairness, unlike Roger Ebert, we’re not spoiling the ending in the first paragraph. 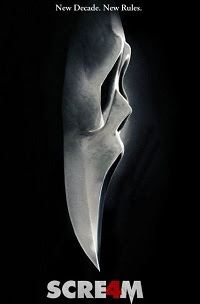 The good news is Writer Kevin Williamson and director Wes Craven restore the elements that made the first film work so well. The missteps of Scream 3, where the series attempted to combine horror with Get Shorty style digs at the inner workings of Hollywood are nowhere to be found. A new cast of teens join up with series regulars Sidney and the now married Sheriff Dewey (former WCW champion David Arquette) and ex-celebrity journalist turned bored housewife Gail Weathers (Courtney Cox) for a whodunit murder mystery. That sense that anyone could be the killer, an element missing in the latter two installments, returns in Scream 4 as there’s no shortage of suspects.
I’m not joking about the long list of suspects: There’s Sidney’s perky PR assistant (Alison Brie) that seems like she’s game for a little murder to drum up book sales. There’s the blonde new deputy that seems to harbor a crush on Dewey and a thing for former classmate Sid. There’s a pair of movie obsessed high school students that run the Cinema Club and host a year Stab-A-Thon which are the movies within the movie that get referenced throughout. There’s Sidney’s cousin’s stalker ex-boyfriend and second runner up in the Robert Pattinson look-a-like contest Trevor (aka “New Billy”). There’s Sidney’s aunt (Mary McDonnell) who always seems to leave the room moments before the killer calls. I think there’s even a fishy looking pizza delivery guy or two in the mix. For good measure, add in Sidney’s cousin Jill (Emma Roberts) and her friends: the horror film buff Kirby (Hayden Panettiere) and Mari (no idea who this is but she’s the token ‘way too old and hot to be playing a high school student, so she’ll be disposed of soon’ girl). Craven plants a ton of red herrings as to the killers’ identity, and the series trademark habit of having characters pop in to the scene mere moments after Ghostface makes an exit returns.

Fans best know Scream for its attempts to deconstruct the horror film. That’s back as well, for as the tagline says: New decade, new rules.  This is where the film falters a bit. Outside of a clever gag where Panettiere runs down just about every horror remake this decade, the attempts to lampoon modern horror fall flat. Scream 4 boils it down to: “Okay, we’re all tired of torture porn, creepy Asian girls with stringy black hair and remakes, right? Cool, moving on then.” The found footage oeuvre finds its way into the mix as Ghostface now films the murders, but when it’s explained, it feels shoehorned in. Characters bring up rules to modern horror, but nothing going happening on screen seems to correspond with them. The opening gambit pulls the rug out from the audience a couple times and makes its point with how forced and lazy most current horror movies with regards to setup and character development. They also have some nice anvil to the head digs at the Saw franchise as well.
There’s also clunky attempts to incorporate social media, which consists of mentioning Facebook, You Tube and Twitter exist.  Considering the pervasiveness of these mediums in our lives, it feels under utilized here. Rather than have a classroom learn about the deaths of fellow students via mass simultaneous text, how about a status update with a profile picture of the carnage?

When Scream 4’s not trying to shoehorn the above commentary to the film, it actually works as a decent horror movie. It’s the best entry in the franchise since the first film. The new cast mostly work (one big exception, we’ll get to that soon) with Panettiere standing out as the movie obsessed best friend. The old stalwarts and new cast integrates well. It’s also has some funny bits. I enjoyed Anthony Anderson and Adam Brody as the two cops waxing rhapsodic over what kind of law enforcement bite it in movies. After four installments with little deviation from the tried and true, there’s not much to be afraid of. The new has a lot of call backs to the first, in both actions and visual cues. There’s a moment where one duct taped character is pulled from the pantry a la Sidney’s dad, and another where Caulkin’s film nerd is tied to a chair outside in a way that’s a perfect mimicry of the first film’s Steve. The film manages to feel like a reboot while continuing the original narrative.

The only real negative I found to the film was Emma Robert’s wooden performance as Jill. She’s been set up as the new Sidney, but displays none of the warmth or strength of character that Campbell brought to her role. Roberts gives the disaffected performance of someone who believes she’s above the material, and is solely acting on the advice of an agent that the box office from the franchise’s built in base will lead to bigger things.  She has a two minute stretch where she goes all Ash that is commendable, but aside from that she’s pretty terrible.

One also gets the sense that Dewey and Gail’s interaction was rewritten on set in order to play off the troubles of the then married couple. The two barely interact in the film, and when they do, it’s almost always adversarial. Neve Campbell makes up for it by acting more invested in the proceedings this go round than the barely-there Scream 3. She actually gets to kick a little ass this time around rather than play the victim on the run that gets the upper hand in the finale.
So what about the Ghostface reveal? It’s….okay? It’s definitely not as stupid as Roman in Scream 3-which, okay, you can say that about any aspect of this film-but a step down from the first film. The motivation actually mirrors that of the second film-the killer wants to be famous. Though it was delivered in a “oh look at me I’ve gone suddenly crazy after acting normal all this time way” fashion, the idea that someone wants to be famous “just because” fits well into an era where the casts of The Jersey Shores and Real Housewives of Des Moines are household names.

Perhaps I’m viewing Scream 4 from the rosy colored glasses of nostalgia or my lowered expectations heading in, but I enjoyed the film far more than I anticipated. I was on record thinking there was little more to Scream 4 than a desperate grab for cash on the financially strapped Weinstein brothers part, and while that may be true, at least we got a decent film out of the proceedings. Your experience will vary depending on how much you enjoy the first film. If you were in the anti-Scream camp from day one, save your money or go see Insidious again because you won’t like this film.  If you’re a fan like me, then Scream 4 makes for a decent bit of closure for the series. Craven’s on record saying he smells another trilogy, but with the body count in this film I don’t see who would be left to bring back.