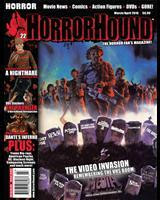 If you’ve got seven bucks burning a hole in your pocket and are looking for some great bedside/bathroom reading for the next month, you can’t do much better than the latest issue of Horror Hound (#22). About one third of the magazine is dedicated to covering the best of the eighties slasher films, and the amount of information and detail in the articles is simply stunning.

As much as I love the internet and the hundreds of blogs devoted to covering horror, you’re simply not going to find the depth of coverage in a blog post or two compared to what Horror Hound is offering. The immediacy of needing to update, whether it’s a breaking news story or a review of the latest DVD or theatrical release, fly in the face of the painstaking research that goes into the in-depth articles Horror Hound specializes in. This is why there will hopefully always be a place and a market for publications like these on your local magazine rack.

As far as the articles themselves in Horror Hound 22, you have yourself an A to Z of slasher films, kicking off with an article titled appropriately enough “A-to-Z of 1980’s Slashers”. While dipping its toes briefly into the history of films that led to the rise of the genre, the piece focuses heavily on some of the lesser known classics from the 80’s, going into the history behind the films as well as providing brief plot summations. There’s a special section on the movies that fall under the category of ‘Christmas Slashers’ and ‘High School Slashers’ and films such as Initiation, Doom Asylum, Blood Cult, Shocker, and Offerings get their just due.

On top of there’s an article detailing the rise and fall of Media Home Entertainment, the company responsible for the VHS boon of horror titles in the early days of home viewing. Anyone who fondly remembers the days of trolling the local video store isles searching for the horror cover art that caught the eye and screamed out for a night of gathering around the boob tube with lights drawn and many slices of pizza consumed will appreciate the piece. It looks at not only the titles they brought to VHS but also the various merchandising items and promotional pieces used to entice rentals and sales. The article comes with a great pullout consisting of the cover art of some of the best loved films.

The centerpiece of the article is an amazing look at The Prowler. This early entry into the slice and dice oeuvre boasted one of the coolest looking killers on film and some damn innovative kills. Going far beyond the typical movie review, Matt Moore’s article goes behind the scenes at the making of the movie as well as the issues it ran into when searching for an audience both domestically and overseas as well as troubles with the MPAA that resulted in some of its kills being trimmed for audiences. The piece is littered with poster art and promotional stills from the film. It’s a terrific read of a film I haven’t watched in years and after reading I immediately added The Prowler to my Netflix, bumping the title to my top spot.

Finally, there a look at the soundtracks from some of the most popular horror movies of the 80’s. The article is divided into two sections-one devoted to the score from various films, the other looking at the metal, punk and rap acts that contributed heavily to the Elm Street series as well as films like Shocker.

Horror Hound’s only a few years old, but they’ve really hit their stride. If you haven’t checked this mag out yet, this is a great place to start-whether you want to rediscover some classic 80’s horror or are just in the mood for some back-in-the-day nostalgia.